The Festival of June

I didn’t really plan this but by a remarkable quirk of fate Seven Songs was booked to play 10 times between the 14th of June and the 9th of July.

And also by luck rather than judgement a busy 3 months of work was coming to the end at the beginning of June – a sort of perfect alignment of the planets. Anyway here is an update of 2016 along with the obligatory spelling mistakes and grammaticals.

And of course I know, I know you know why I do this but just so I don’t forget… Seven Songs performs live music in peoples living rooms (also gardens, kitchens, pubs, shops, home festivals and village halls) and collects mostly for dementia charities instead of charging performance fees… have a listen to Seven Songs on BBC Radio Sheffield.

As of this moment I think we’ve raised more that £2000 this year so we’re up to about £10, 350 that we’ve raised to date. And that is thanks folk who have had that leap of faith or passed on my details or are also battling dementia who have invited me along to play: you are all awesome, inspiring and remarkable – keep on keeping on.

So the last 6 months- there has been loads happening here are some of the highlights: 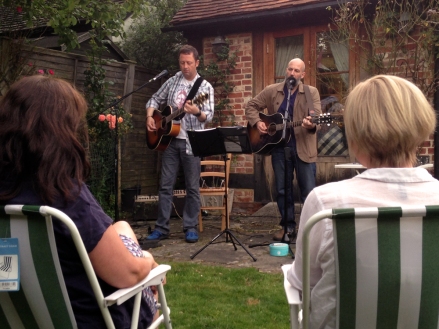 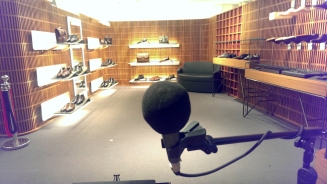 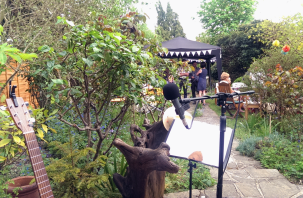 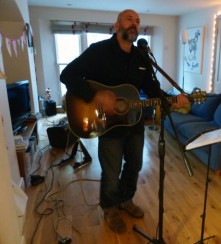 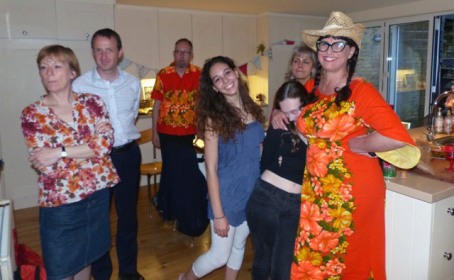 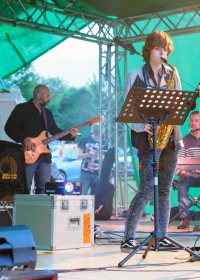 In no particular order…

A lovely night at Sonning Village Hall for the RNLI with Ginny and Claire.

Disappointing and expensive evening for Delete Blood Cancer at the Bally Shoe Shop on Bond Street – I’d do it again in a flash but they were taking the piss – some of them were not very nice. On the up side an epic (if unappreciated/ignored) cartoon from the genius Mike Dicks.

Magnificent St Georges day at Princess Risbourgh Rotary Club with The Bee Keeper – and I got to choose the best Englishman and woman outfit contest. And we raised a small fortune.

Ma Martins 80 Birthday – Yet again the lovely Cathy had a Seven Songs and got her family together.

TA Fisher Summer Party– what a lovely and unexpected pleasure to play in Sonning to a massive company barbecue – we should all hope our bosses are like John.

The Knowl Hill WI with Ginny – yup we played Jerusalem. We sounded amazing too. Old people can indeed rock.

Dolphin School with the Dolphin Band – we sounded frikin’ amazing. And I me Phil our old neighbour who is  now the caretaker at the school

The Three Un- conference with Nora… lovely to see some pals again and Nora has a wonderful voice.

Nestival – If it goes ahead next year do every thing in your power to get there – I think a case of Prosecco will get you in. But you will have a blast.

There is more to come… get in touch if you have a living room or garden you want me to play in.

And most important none of this is possible with out a bunch of very special people – those who’ve joined in and played with me (Ginny, Simon, Matt, Nora, Hannah, Harman et al) … those who made things happen (Brain, Colin, Duncan, Mrs McG and many more) and all those lovely, adventurous folk who’ve let a slapdash amateur sing to them in their homes. You are magic thank you – and there is more to come.