A Fistful of Sausages

If someone said to me as a small boy that I would be going on an adventure to find the best sausages in Europe when I grow up I would have known, in that moment, that life was going to be good.

As a 10-year-old my experience of sausages was the Scottish Skinless ‘Link’ usually eaten with Ayrshire bacon and eggs. Sometimes, on a Sundays, we would include fried potato scone.  Occasionally I may have had a hot dog at some of my parents more fancy Cosmopolitan friends in Ayr or Kilmarnock. I had a pizza in Ayr in about 1975, it was bamboozling and inedible – tomatoes were for salads – cooking them was weird. Ayr was also where I had my first experience of Peanut butter which I found equally confusing.

Me, Davie Walnut, before I tried my first Kebab or Pizza

I paint a dark picture but I wasn’t a completely immune to new cuisine. I had my first Doner Kebab in the Glasgow  (1981) – it was raining, we were standing in a doorway somewhere in the city centre possibly near Buchanan street (that’s how we rolled). I can say, without doubt, that my first Doner was the most delicious, exotic and unusual food I had ever tasted.

Anyway, the point being in mid June the Walnuts are going on another adventure through France and Spain to Barcelona and back. We will be eating and comparing sausages on the way.

I have no idea what awaits us (I guess I could do an internet search for sausages of Southern Europe).

Just to remind you about the Walnuts – we are small boys disguised as middle aged men who have been given a camper van by the wonderful Caravan and Motorhome Club of Great Britain and Bailey’s of Bristol and we’re going to travel, play music, eat sausages and raise donations for dementia care and research with Alzheimer’s Research UK.

The Walnuts are
Davie McGirr: me – founder of sevensongs.org and owner of a guitar
Matt Allwright: – lap steel aficionado, journalist and TV presenter of Watchdog, One Show, Rogue Traders and other things
Donald Stewart: – Celtic Fiddle legend and shoe model

Action shot but missed out on Donald’s shoes 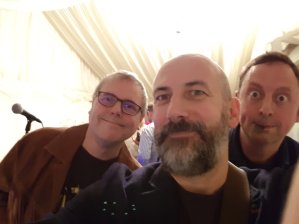 Me, Matt and Donald Walnutnt

Anyway back to the business in hand, on our last trip to Northern Europe we came across many types of pølse and wurst but the star of the show was at the home of John and Gunn where we had a Venter Pølse – The Waiting Sausage. This is a true Northern God of a sausage served with a potato flatbread and prawn salad (yes I did say prawn salad) and it is to eat while you are waiting  – probably for more food but really you could just be waiting.

If we can find such a sausage gem on our trip through France and Spain then all our dreams will be fulfilled and we can return home like mighty Caesars having conquered new lands.

You’ll be able to follow us on our trip wither you are a friend of the Walnuts, a motorhome nut, a sausage epicurism or just enjoy watching pale British blokes unravel abroad.

AND this time around we’ll be playing a couple of public events so we’ll make sure you know in advance and if you happen to be in France or Spain in mid-June you can drop by.

Final thing, a word about my travelling companions – they are extraordinary. I’m thrilled to be travelling with Matt and Donald again and excited about playing with Fergus. Each one of them brings a unique set of musical talent and life skills that I just find remarkable. If you need a lawyer, a personal finical advisor, a quizzer, a hat advisor, an investigator, a journalist, a guru, a traveller, a playwright, a musical director, shoe model or a composer then Donald, Matt and Fergus are your lads. I can throw some decorating and cooking skills into the mix but really they are at the very heart of the Walnut’s Brain trust. Europe beware!

Right, I’m off to buy a beret.

We chose Alzheimer’s Research UK because they fund a broad range of research projects to understand dementia and which drive towards better diagnosis, preventions and treatments. Dementia is an international problem and we beleive that in terms of researching for solutions and treatments it is best to focus in an international organisiation with global reach and interntaional projects.

You can find out more about their research projects here.

We have had such amazing and wonderfully generous support from a number of organisations. The Caravan and Motorhome Club and Baileys of Bristol who between them have supplied a blinking motorhome! Insurance! and paid for us to cross the channel! They have made this whole adventure possible. I recommend you all buy a caravan or Motorhome from Baileys and join the club. Donald Walnut did.

Strathearn Distillery: who have donated two cases of mixed Rum, Gin and Whisky to give to our hosts and guests – It might just work and if our guests are all drunk we will sound a billion times better than Apollo 11.

Ibérica Restaurants: Who has provided us with a hamper of the most delicious deli food and Cava and ham – Like the whisky, rum and gin we’ll try and share.

And the Aberdeen Solicitors Aberdein Considine have donated to our kitty which is a beautiful gesture and will cover things like petrol, campsites etc and we will put some of it in the cake tin too.

Unless our hosts want to donate to a specific  local or national dementia charity, which we encourage, then we send all donation in the tin to the Alzhiemer’s Research UK.

If you’d like to make a donation then go to: The Walnuts Just Giving Page.

You can follow Seven Songs on facebook. Get in touch if you’d like Seven Songs to play for you – no audience too small, no situation too embarrassing, no island too remote and no music too live. Email me at davie.mcgirr@gmail.com