Seven Songs played a gig for Delete Blood Cancer at a shoe shop on New Bond Street – I’m not abandoning Dementia but this is also an important cause and was thrilled to be involved.

I’m not an expert on Blood Cancer so I asked my friend Mike Dicks who is currently in remission from leukemia to write about Delete Blood Cancer. He did something even better and more wonderful – he made a special Mike & Scrabble cartoon strip featuring a bit of Seven Songs.

Before we get to Mike & Scrabble though, here is a bit of background about Delete Blood Cancer..

Every 20 minutes, someone in the UK is diagnosed with a blood cancer like leukemia, lymphoma or myeloma. Delete Blood Cancer’s Mission is to provide a suitable donor for every person in need of a blood stem cell donation.

So isn’t that just amazing? If you live in the UK, are between the age of 17 and 55, don’t have a chronic illness and a reasonable Body Mass Index then you can request a swab pack which you rub inside your cheek. You post off the swab and then hope that you are a match, if not immediately then some time in the future. If you do this you might actually save someone life!

There is nothing to stop you doing this now – register for Delete Blood Cancer, they’ll send out a pack to you in the post and see if you can become a blood stem cell donor.

How Scrabble Came to Own Mike 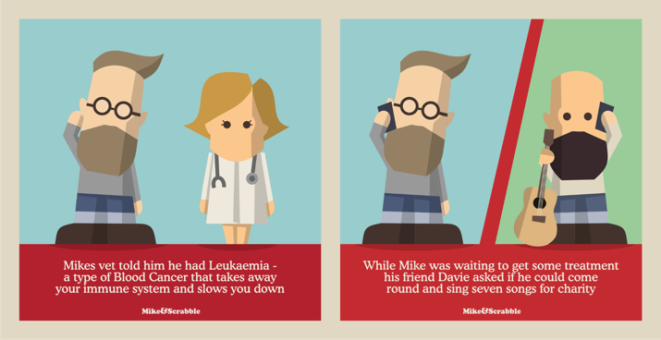 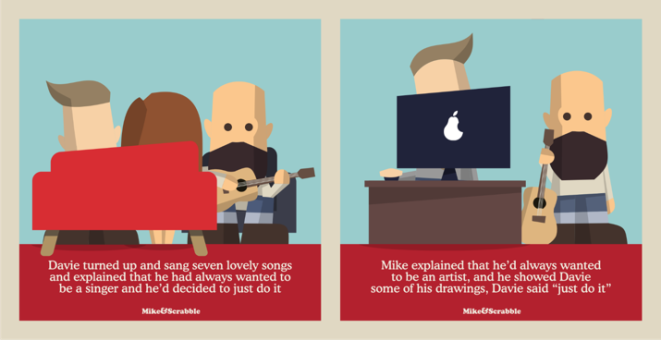 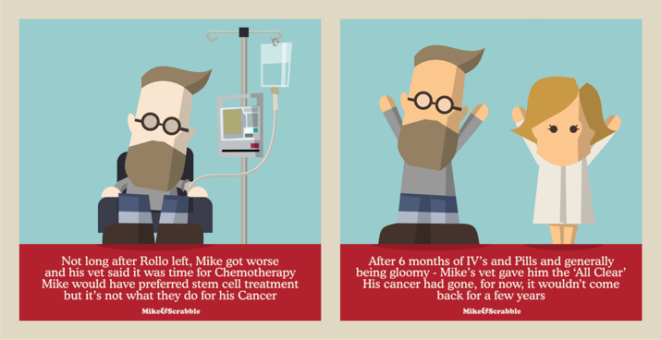 I registered as potential blood stem cell donors with Delete Blood Cancer about a year ago, coincidentally about the time I first heard that Mike had been diagnosed with leukemia and by another coincidence a friend of mine Peter Mas-mollinedo became the CEO of Delete Blood Cancer.

When Peter called and asked if Seven Songs would step into the breach and perform for an event I said yes, of course – what a wonderful privilege.

After half a dozen careers and a minor skirmish with Cancer, Mike Dicks has become an illustrator, designer and humourist, working from his Brighton studios with guidance and advice from his dog, Scrabble.

With Scrabble, Mike is the co-creator of Mike&Scrabble – a cartoon guide for dogs who own humans. He has also created two series of prints, postcards and probably tea-towels – Brightones that feature illustrations of some of Brighton’s much loved sights and Beatones – that feature iconic images of performers and their lyrics. Mike is also the Mayor of Trumpton – a satirical twitter account that likes to poke fun at a certain yellow and purple party.

You can follow Mike and Scrabble @mikeandscrabble and at facebook.com/MikeAndScrabble